The Skene’s gland is thought to be the gland responsible for female ejaculation, and are understood to be connected to the same sort of structure as the male prostate gland.

The Skene’s glands drain both into the urethra and near the urethral opening, and are surrounded by tissue that includes a part of the clitoris extending up into the vagina, which swells up with blood during sexual arousal, producing a different type of orgasm, frequently known as the ‘g-spot orgasm’. 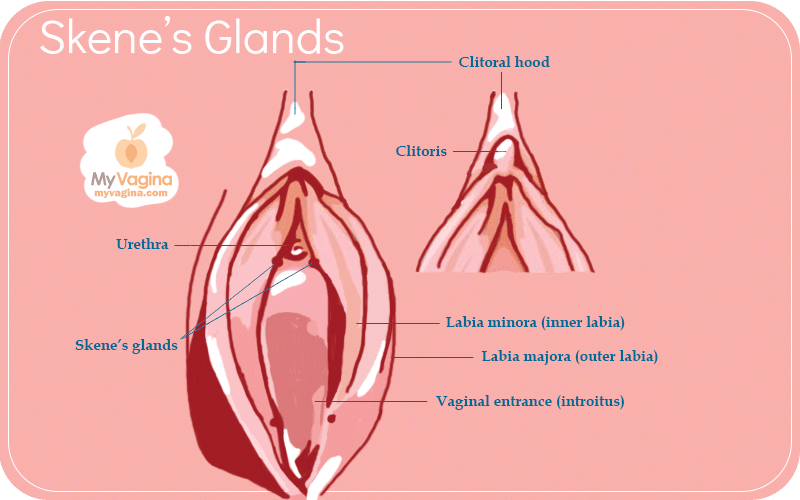 The never-ending debate about female ejaculation, whether it even exists, etc. was discussed in Emanuele Jannini’s 2002 paper, whereby Jannini found that there are highly variable anatomical expressions of the Skene’s glands, with sometimes glands missing entirely in some women.

This means that if Skene’s glands cause female ejaculation and g-spot orgasms, and some women have no idea what we’re talking about, an anatomical difference may be why.

The fluid produced by the Skene’s glands is very similar in composition to prostatic fluid, including specific proteins and enzymes (Human Protein 1 and PDE5).

The glands – the male prostate and Skene’s – appear to operate very similarly when examined closely. This is why researchers are now starting to call the Skene’s glands the female prostate.

As mentioned, problematically in some women, it actually doesn’t exist, complicating the issue somewhat.

Clinical implications of the Skene’s glands The female prostate is important clinically for several reasons. The first is it can be the origin of infections and cancer. Additionally, HIV infection may occur here [1. Ablin RJ, 1991, HIV-related protein in the prostate: a possible reservoir of virus. Amer J Clin Pathol 1991;95:759–60]. Some rape cases may have mistakenly caused potentially innocent men to be found guilty based on the presence of PSA, at a time when it was believed that women did not have prostates and could therefore not produce PSA[2. Longo VJ, . The female prostate. Urology 1982;20:108–9].

Women produce PSA from the prostate, of which elevated levels are one of the signs of cancer in the prostate in both men and women.

The bigger the Skene’s glands, the more of a ‘squirter’ a woman is. Female ejaculation has been a complex topic because as previously mentioned, not all women are able to do it, while others can’t help it. It isn’t something to be performed at will for most women, and can be rather elusive.

History and discovery of the Skene’s glands

Things that can go wrong with your Skene’s glands

Jessica is a degree-qualified naturopath (BHSc) specialising in vulvovaginal health and disease, based in Melbourne, Australia.

Jessica is the owner and lead naturopath of My Vagina, and is a member of the:

Any cookies that may not be particularly necessary for the website to function and is used specifically to collect user personal data via analytics, ads, other embedded contents are termed as non-necessary cookies. It is mandatory to procure user consent prior to running these cookies on your website.